During the presidency of the Czech Republic in the Council of the EU, Terralóna and Lunalón (planet Earth and Moon), inflatable balloons, provided by the Brno Observatory, will be exhibited at the Royal Belgian Observatory in Brussels! The balloons measure 10 metres and weight about 150 kg each. They will be presented to the public as part of the Observatory's open days on 24 - 25th September. 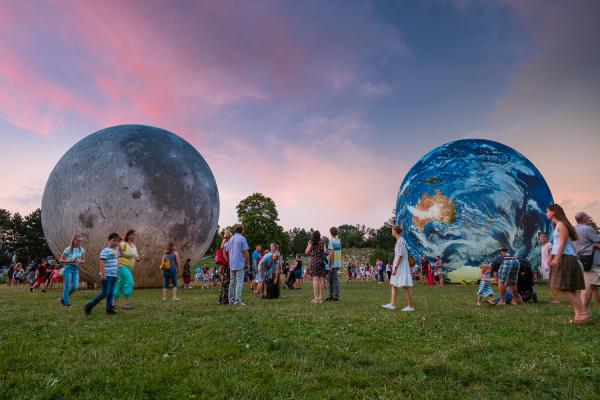 Visitors will also have the opportunity to see the exhibition "I WANT TO BE HUMAN - Arnošt Lustig's message to the stars and not only to them" in the Planetarium of the Royal Observatory. This international traveling exhibition of the Arnošt Lustig Endowment Fund presents the "Czech calling card" of humanism and universal values ​​embedd in the ideological legacy of the writer and Holocaust witness Arnošt Lustig in partnership with the Representation of the South Moravian Region to the EU, the Czech School without Borders in Brussels, the Czech Literary Center, and the Observatory in Brno.

The main partner of the South Moravian Region in the promotion of space bodies is the Brno Observatory, being one of the eighteen subjects of the Brno Space Cluster, which is a group acting as one entity to obtain commercial orders, popularization, and education about the space industry, and not only in Brno. Nowadays, the Space Cluster is also a member of the European Space Agency and strives for ambitious missions with a great scientific contribution with purely Czech involvement.

We also thank The Royal Observatory of Belgium, The Royal Meteorological Institute and The Royal Belgian Institute for Space Aeronomy for cooperation.